That is the sound of Mansoor Naderi’s cane striking the steps connecting the C- and B-Wings in front of the Sheridan College bookstore. Naderi, a visually impaired creative arts graduate, and too proud to use the ramps built for accessibility takes a quick short breath and feels his way up the stairs.

He only started using a cane in October 2013, being too spirited to use it before. He taps each step with the cane to determine exactly when he should lift his foot, and where it should land. Naderi was born with retinopathy of prematurity. During his mother’s pregnancy, lack of blood supply to his eyes caused damage to the extent that there is no light perception in his right eye, meaning he is only able to see flimsy shadowy figures. Damage to the other eye has now left it with only 15 per cent vision.

“I have the full package, I’m also colour-blind in my working eye,” he says. “How to explain what I can see? Well, I can’t see past the bridge of my nose unless I fully turn my head.”

Explaining how he draws despite his visual impairment, Naderi immediately dropped down within centimeters of the table to demonstrate how close he has to be to the canvas when he’s working on his art.

He was cocooned for most of his life, being escorted everywhere until he was 17. Naderi, turned 23 in April, and has dealt with a lot of adversity in the form of name-calling, bullying and isolation, but what has kept him going all these years is none other than the alter ego, Spiderman, of the boy-next-door Peter Parker.

“Had it not been for Spiderman, I would not be who I am today. So, I owe everything to that character,” says Naderi. 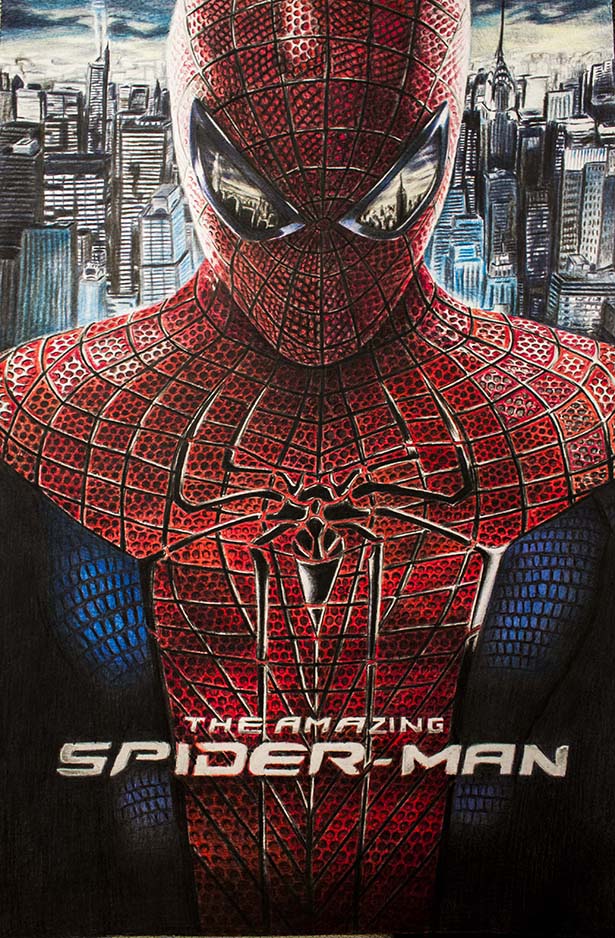 It isn’t just the superhero antics that Spiderman uses, but also his ability to deal with social isolation, guilt and the conflict of choosing between being able to do something and actually going ahead with it that Naderi strongly identifies with.

As a child, he developed a thick skin to deal with the adversity he faced every day. He attributes this to the values he gained from Parker’s struggles in life.

Gaining his strength from Parker and Spiderman, Naderi steered himself clear of responding to any negativity in his life.

“No matter what, I always remind myself, everybody has a choice, you always have a choice most of the time. You can choose to do good or bad. You are who you choose to be.”


Coming to Sheridan was Naderi’s first step towards achieving his ultimate goal of becoming an art teacher. He has already been admitted to The University Of Guelph in the Bachelor of Arts of Visual Arts. After completing his bachelor he plans on studying for a teaching degree so he can become and arts teacher.


Naderi’s motivation to continue is purely intrinsic. He finds inspiration in his own story and in his own life.

“The fact that a piece of me goes into someone else’s home, and the fact that I can reproduce work that gives people joy, that’s my motivation to continue.”